[Opinion] The differences between male and female authors 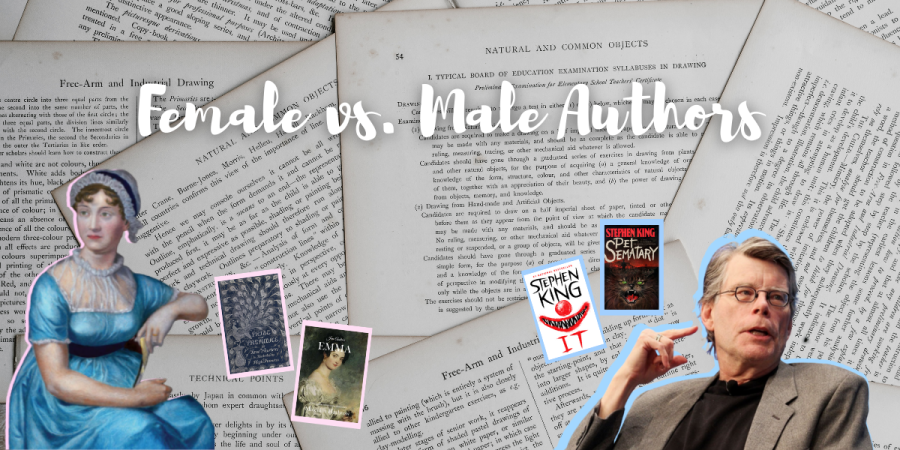 Books are such a vital part of entertainment, maybe not as much now considering that we have shows and movies at the tips of our fingers. But previously, most of our entertainment came from books, which makes them a crucial part of our society. Similar to having favorite actors and directors, many people have favorite authors and you can tell a lot about a person based on their favorite author. In general, there are many different areas where male authors lack and don’t articulate as well as female authors.

In many male authored books and pieces, women often get objectified, no matter the genre of the book. I don’t think this needs further explanation on why this is wrong, but I’ll tell you anyway. Objectifying women leads to many insecurities among them which can later lead to unwanted actions, such as eating disorders, self-harm, and many mental health issues. Not only these issues but objectifying women is just wrong in general. Throughout history, women have been objectified for as long as you can remember in books, movies, shows, and in real life.

For example, Ben Aaronovitch, author of Rivers of London, bases the value of a woman based on their physical appearance. He wrote, “The voice belonged to a plump, round-faced woman of the sort that develops a good personality because the alternative is suicide.”

This is how men perceive women, as objects that they should pick and choose what qualities they want them to have. This wasn’t even the worst quote I’ve found, seeing as this was the only appropriate enough to be discussed in class. Instead of focusing on unnecessary details about a woman (or man’s) body, focus on the plot of the book and which plotlines will make the story more interesting to read.

In some descriptions I’ve read, they include unnecessary details which are demeaning and illogical, such as describing a woman’s physical assets as an emotion. In the book The Wedding Plot, author Jeffrey Eugenides wrote, “Her breasts, of which she was normally proud, had withdrawn into themselves, as if depressed.”

This is an example of a beautiful description regarding emotion within someone and Woolf describes the internal emotion that this person is feeling rather than saying that an aspect of their physical body felt upset, which frankly does not make sense.

Many female authors don’t feel the need to objectify a man, not even in romance books, seeing as that is not the message they want to convey when someone reads the book.

For men reading Stephen King, Jeffrey Eugenides, and Ben Aaronovitch, they focus on the ridiculous descriptions on women and miss the point of the book completely. Many males do get objectified in the real world and it’s saddening, as women should understand that because as we are equals, we should have the same amount of respect.

What I want everyone to take away from this is not only treat one another as equals and with respect but to also come forward and report disgusting behavior such as the examples above. If the book you are reading has a grotesque description of one’s assets or someone is being treated as an object, bring awareness to the fact that this book and author should not be supported until they learn from their mistakes. Tell everyone not to support the author and not buy any books of theirs until the mistake is for sure not going to occur again. By doing this it can help eradicate books with unwanted descriptions from existence.